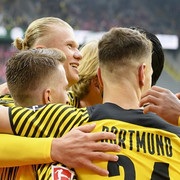 A keen eye watching an elite football or rugby match can spot a slight stretch in the fabric of a player’s shirt between the shoulder blades. This is the sign detector of a GPS device that tracks their physical performance during the match: distance covered, maximum speed, peak acceleration, number of sprints, etc. NFL and NHL players have their own tracking sensors affixed to their pads, but NBA and MLB athletes, for example, are currently without a device.

The same race data is collected on each via their advanced stats partners, Second Spectrum and HawkEye respectively, which use a series of arena ring cameras to triangulate the player’s position and orientation. football players almost uniformly wear GPS devices, but NFL scouts generally don’t have access to this data. Instead, they turn to companies like Sportlogiq and Slants, whose computer vision platforms can ingest old game videos and retroactively calculate comparable data sets.

Likewise, biomechanics has been relegated to the realm of research labs, with test subjects equipped with dozens of reflective markers to guide the collection of 3D motion capture data. Now, lighter setups are possible with a number of companies – Mustard and ProPlay AI in baseball, Sportsbox AI in golf, Physimax for movement – ​​solutions that only require one smartphone. The sports world is not yet entering a full-fledged post-wearable era.Devices on the body will remain important in the near future for measuring biometrics and internal load (heart rate, muscle activity.

Monitoring hydration and blood sugar, to name a few), as well as in certain training contexts where camera coverage from a certain height or vantage point is not feasible. But the industry is becoming optical in one important way. Its advantages are numerous, but are underscored by the obvious: players do not need to be persuaded (or contractually obligated) to wear a device. Data collection is simple and non-invasive for the athlete and more readily available from teams and broadcasters. The metrics are already intrinsically tied to the video, eliminating the need to sync different entries by date and time.